Deciding between two name-brand food dehydrators can seem like a daunting task. After all, they’re both beloved by many home cooks and feature the best-of-the-best bells and whistles… so what’s really the difference? Now, we’ve already put the Excalibur to the test against the Sedona food dehydrator, but how does it compare with the Nesco Food Dehydrator? In this article, we’ll be taking an in-depth look at the brutal Excalibur vs Nesco Food Dehydrator debate and finally putting it to rest. 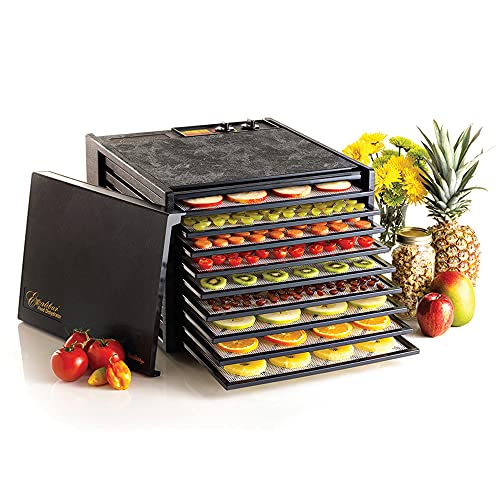 The Excalibur Food Dehydrator is a box dehydrator that looks professional and sleek. It has 9 BPA-free drying trays, and features 15 square feet of drying space for fruits, veggies, and meats. Its adjustable thermostat ranges between 105 degrees to 165 degrees Fahrenheit for drying fruits and jerkies, along with a 26-hour timer to get your snacks perfectly dried.

Rather than blowing air vertically down all 9 trays, like some other dehydrators on the market do, the patented Parallex Horizontal Airflow allows the food to dehydrate quicker while preserving the wonderful taste and more appetizing appearance than most dehydrated foods without the need for tray rotation. The Excalibur is operated with two dials — one for temperature and the other for the time. A black, front cover slides over the opening to the trays to retain heat for a more efficient drying process.

The Excalibur also features a very helpful drying guide directly on the unit that details the temperature at which different types of foods should be dehydrated. It includes instructions for Vegetables, Fruits and Fruit Rolls, Meats and Fish, Yogurt, Living Foods, Raising Bread, Herbs, and Jerky. 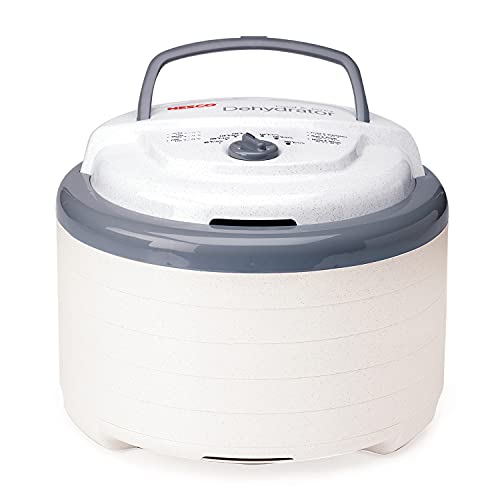 With thousands of raving reviews, the Nesco Food Dehydrator is a pleasantly affordable, durable, and user-friendly dehydrator. It has an adjustable thermostat that ranges between temperatures of 95 and 160 degrees Fahrenheit, along with a powerful 600-watt top-mounted fan. It comes with 5 drying trays, but is expandable up to 12 trays, and features a unique Opaque Vita-Save exterior to block any harmful light that may destroy the nutrients of the food during the dehydration process.

The Converga-Flow system of the Nesco dehydrator forces hot air horizontally across the trays, rather than vertically through each of them, for even, complete drying and to avoid flavor cross-contamination. This particular model includes 2 Fruit Roll Sheets, 2 Clean-A-Screens, a sample of jerky seasoning with cure samples, and a recipe and instruction book. It features a central dial to set the temperature and has a handy on-unit guide to recommended temperatures for certain food types.

It’s also highly affordable, coming in at well under $100, making this a decent budget buy for those not willing to spend an arm and a leg on a dehydrator.

Both the Excalibur and the Nesco dehydrator are easy to use and a great buy for first-timers. They have minimal buttons and dials to make operation quick. Neither dehydrator has a viewing window, which is a downside in and of itself because you won’t be able to view the process and catch any potential over-drying or burning. These dehydrators have an abundance of space for dehydrating pounds of food at once, though the numbers vary between the dehydrators, with the Excalibur including more trays with your purchase and the Nesco able to expand to 12 trays (with additional purchases).

The first, and most notable, difference between the Excalibur vs Nesco Food Dehydrator is the price. The Excalibur is basically double the price of the Nesco Food Dehydrator, making the Nesco a far more affordable option. The Excalibur is also quite a bit bigger than the Nesco, making it less likely to be an ideal fit for smaller kitchen spaces. One thing that we feel the Excalibur may have a leg up on is its spaciousness. It comes with 9 trays, and while the Nesco is expandable up to 12 trays, it only comes with 6 and the other 6 are a separate purchase.

Benefits of Having a Dehydrator

If you’re considering purchasing a food dehydrator, you may be wondering what’s really in it for you. So, what are the benefits of owning a dehydrator?

After all is said and done, we’d have to say that the Nesco is the best option! We chose the Nesco because it’s affordable for the average consumer, it comes with a decent amount of drying trays and can expand up to 12 trays, it would fit nicely on anyone’s kitchen counter, and works well for fruits, veggies, and meat alike.

No matter which dehydrator you choose, both are highly efficient and would work great!

Stop By Our Dehydrating Recipe Articles!

A few other articles that may help:

Tweet
Pin
Share
0 Shares
Note: this article may contain affiliate links. If you make a purchase using one of these links, I may be paid a referral fee at no expense to you.
« Raw Food Dehydrator Reviews: Top 5 Best Options
Amazon Gold Box Deals for Saturday August 15th… Hurry, Ending Soon! »