If you follow me at all, you know I am a big reader. I consistently share books on social media- ones that I am reading, going to read, random covers that catch my eyes, but when it comes to my kids, I have two kinds: My daughter the ‘non reader’ and my son, the ‘can’t reader’.

Let’s start with my son. He is just newly 3 so he is fascinated by all things and has shown a real love of books. He is constantly asking what words on our on shirts, on boxes, on street signs and he asks to read daily. But he cannot read on his own yet to make book choices.

However Charlotte, my 9 year old, is a totally different story. She thinks when we tell her to ‘go read’ that it’s punishment. I have tried it ALL. I have let her pick out books herself, I have bought books I loved as a child, I have enrolled her into magazine subscriptions for her age, you name it, I have tried it. So when I was asked to check out this Ricky Ricotta and the Mighty Robot series I said sure because in the end I assumed my 3 year old and I would be reading it so what did I have to lose?

From the moment it arrived and I had stuck the four books on the counter waiting for me to look over, they intrigued Charlotte. The flashy covers and the colorful insides- she asked me if she could check them out. I was like…absolutely! By all means…take those books away! And she did.  They disappeared because she LOVED them. She took them to school, she read all of them, and she asked me to buy the rest of the series (which we are waiting for to be published). That has never in the history of books ever happened in this house.

Seems like I am not the only mom that has had this experience with Ricky Ricotta! Kids adore these books and I learned something about my daughter- she is a visual reader. She needs the pictures in a story to really get involved and there are plenty of books out there her age group that provide that.

It’s nice that this one little blog post turned into such a huge thing for our family, so I am very excited to share these books with you in case you are going through the same struggle with the non reader in your house.

ABOUT THE SERIES
From Dav Pilkey, creator of Captain Underpants, and acclaimed artist Dan Santat, an out-of-this-world friendship adventure with brand-new full-color illustrations and mini-comics throughout!

Ricky Ricotta is a little mouse with BIG problems! Every day he is picked on by the neighborhood bullies. He lives in Squeakyville with his mother and father, and being an only mouse, he is often lonely. That is until SOMETHING BIG HAPPENS! A giant flying robot enters Ricky’s life and an unlikely friendship is born! Together, Ricky and his Robot must save the planet from a galaxy bursting with bad guys!

ABOUT BOOK ONE: RICKY RICOTTA’S MIGHTY ROBOT
Little Ricky Ricotta has a problem: the bullies at school pick on him all the time. Until one day, he saves the life of a mighty robot. Together, Ricky and his Robot face the bullies, and save Squeakyville from a giant evil lizard monster. That’s what friends are for!

ABOUT BOOK TWO: RICKY RICOTTA’S MIGHTY ROBOT VS MUTANT MOSQUITOS FROM MERCURY
Mr. Mosquito hates Mercury. The days are so hot, they melt his flip-flops, and the nights are so cold, his toothpaste freezes solid! He’s decided to take over Earth instead. Ricky and his Robot must stop his army of massive Mutant Mosquitoes!

ABOUT BOOK THREE: RICKY RICOTTA’S MIGHTY ROBOT VS VOODOO VULTURES FROM VENUS
Victor Von Vulture hates Venus. His toasted cheese sandwiches are always way too gooey, and ice cream melts in a second! So he and his army of Voodoo Vultures try to cast a spell on the Earth. It’s up to Ricky and his Robot to stop them!

ABOUT BOOK FOUR: RICKY RICOTTA’S MIGHTY ROBOT VS THE MECHA-MONKEYS FROM MARS
Little Ricky Ricotta has a problem: the bullies at school pick on him all the time. Until one day, he saves the life of a mighty robot. Together, Ricky and his Robot face the bullies, and save Squeakyville from a giant evil lizard monster. That’s what friends are for!

Now to celebrate and bring to life more Ricky Ricotta for my kids newly found love of books, we made a Robot Station this weekend! I set up tons of crafts, glue, and random odds and ends so we could all make masks. We got a good kick out of Charlotte putting a noodle in her shirt for Robot Arms! 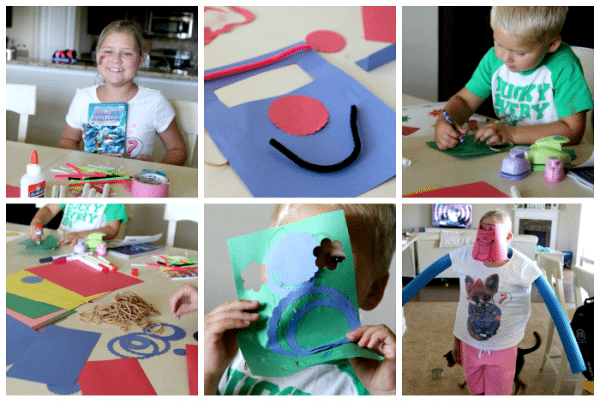 And even better, we made a

Ricky Ricotta and the Mighty Robot No Carve Pumpkin

To create you need

1) First I took the pumpkin outside and spray painted it silver. I picked up the paint from Hobby Lobby. Its Krylon Original Chrome. It dries in about 15 minutes and they say not to touch for 2 hours, but I just brought into the house and put on a towel. 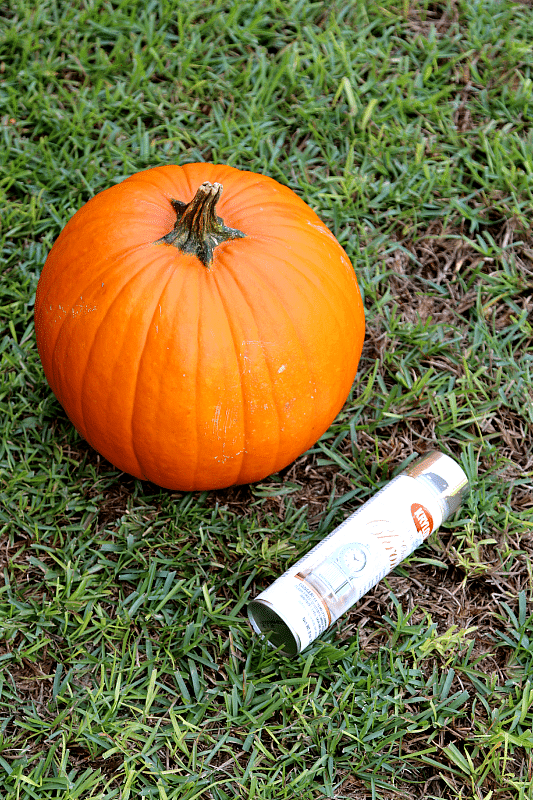 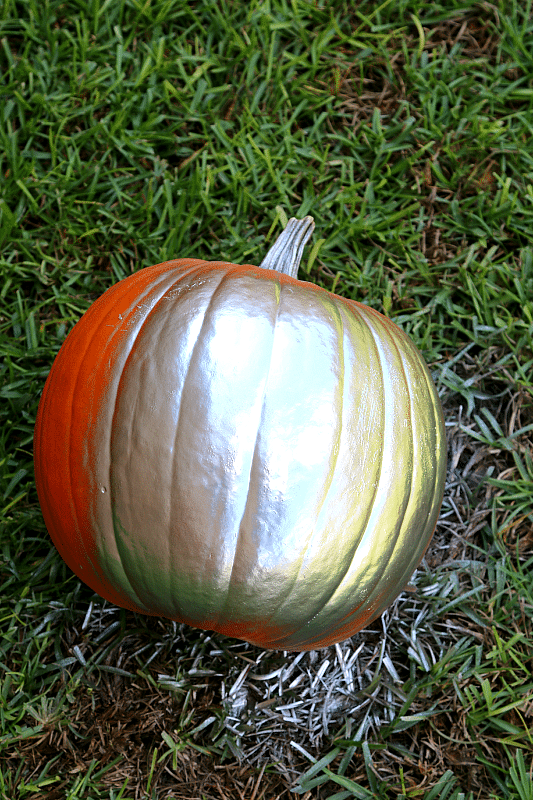 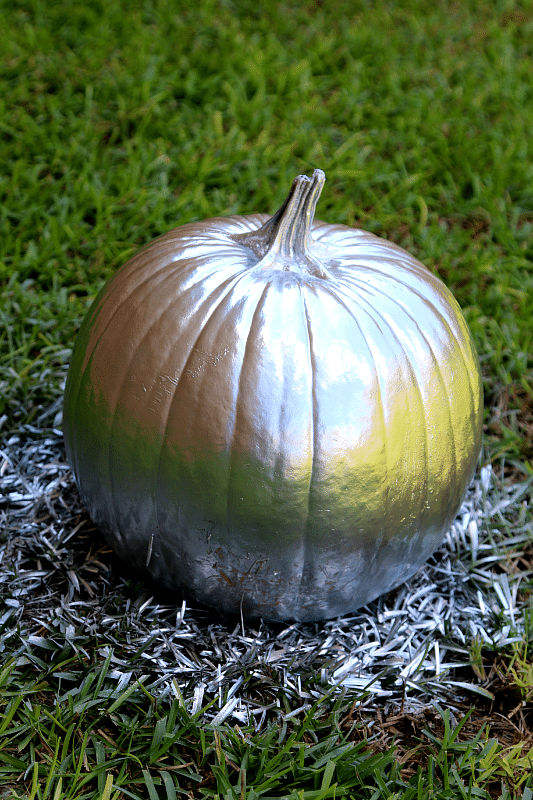 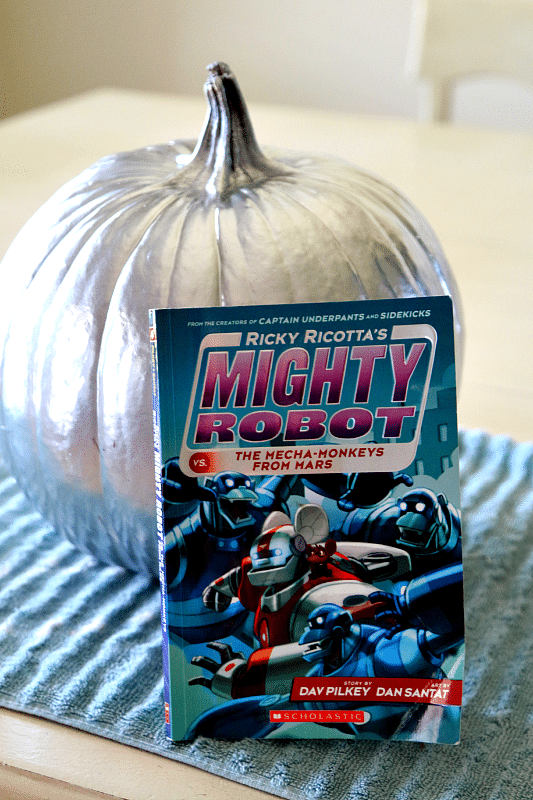 2) Draw a long rounded off rectangle shape for the eyes in black Sharpie. 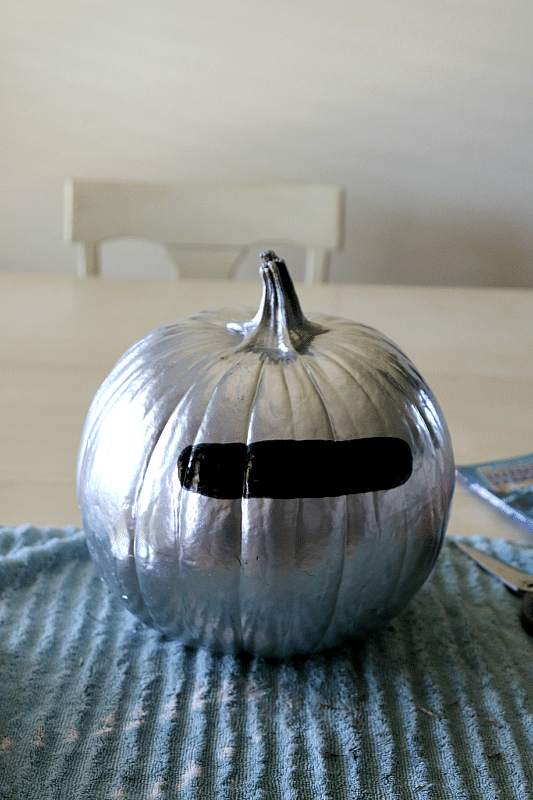 3) Add strips of red masking tape in the middle of the eye section. Your Mighty Robot is starting to take shape! 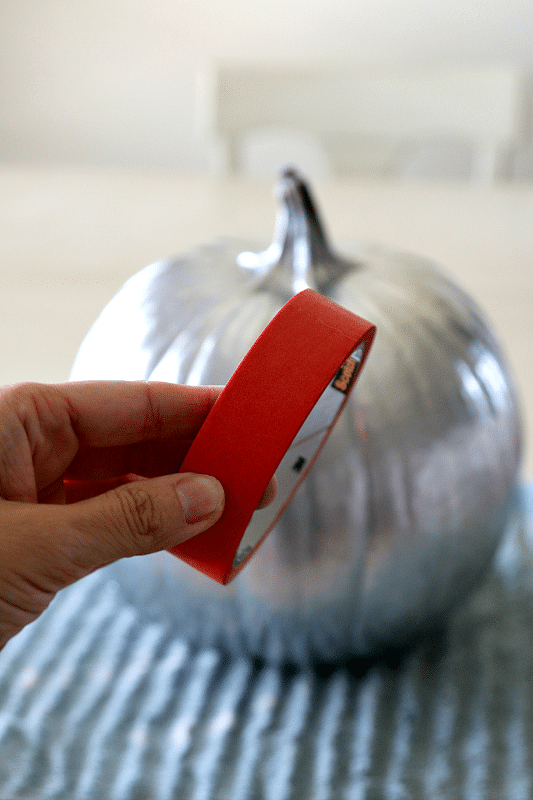 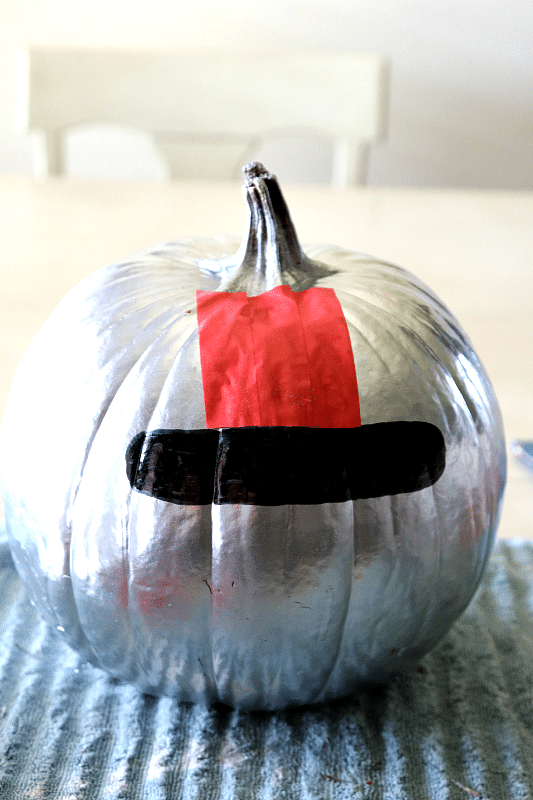 4) Now on each end of the black oval/rectangle shape, paint in two blue circles and dabble some blue glitter on top. I used some modge podge to secure it but you can use regular glue as well. 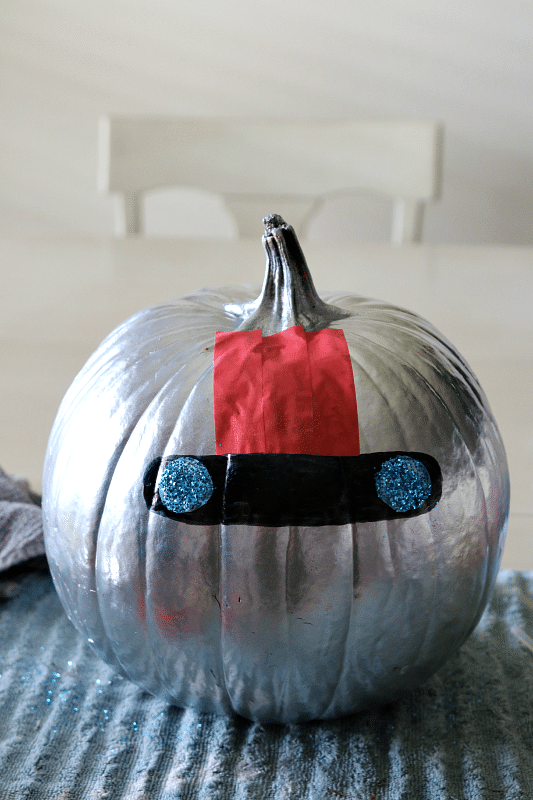 5) Spray paint two half circles with your chrome paint and secure with hot glue. Paint two small wooden circles gray and also secure by your ears.  Cut up a wooden stick to create a nose.  This is the point I also cut up a leaf shaped piece of wood into a triangle for the top of his head. I have a bag of misc shapes from the craft store that come in handy for this type of thing. They are only about $3 a bag so its nice to have them around. 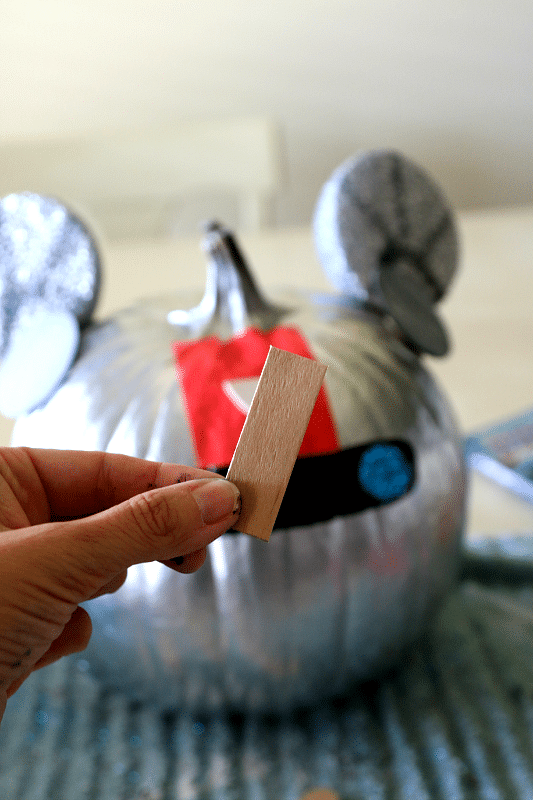 6) This was the only part that took some work. My husband had to change the dryer vent tube this weekend so he saved it for me. It was really easy to cut with regular scissors (although sharp so be careful!) and I used a piece of that for the Robots mouth. I cut the tube and then put hot glue on it and sat the robot pumpkin on top to secure. 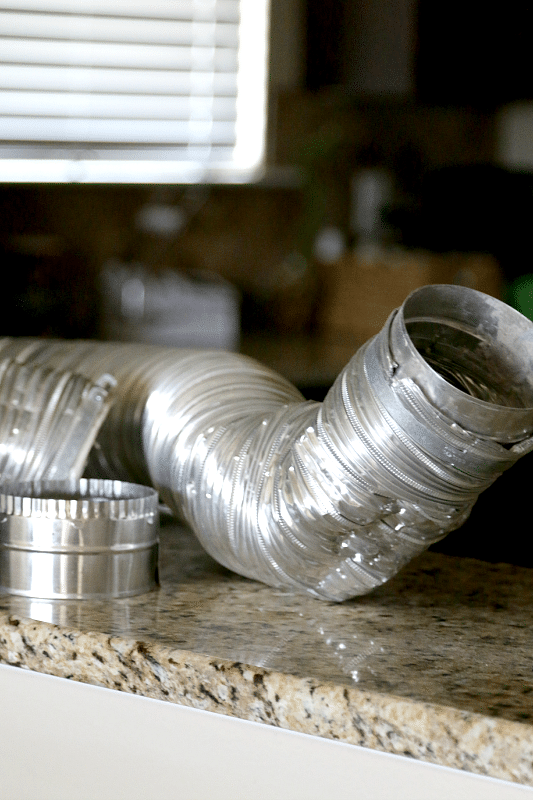 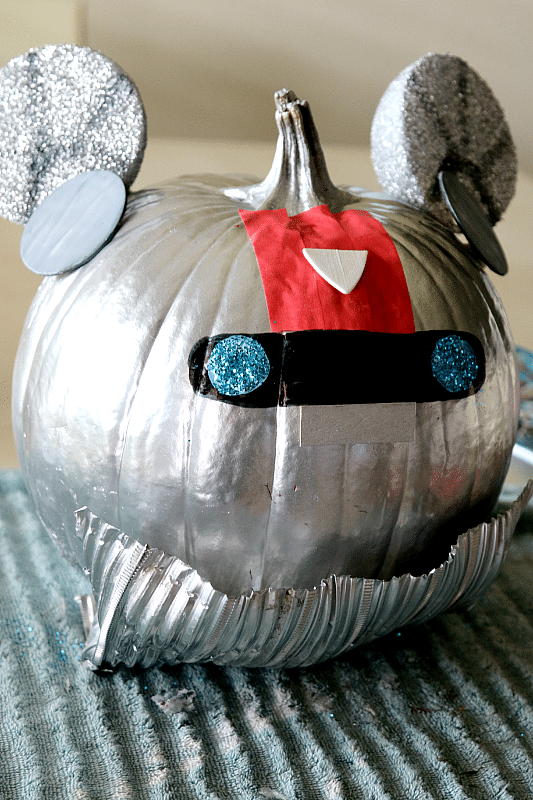 7)  Now you are going to want to make Ricky Ricotta.

Originally I was just gonna do the robot but once he was in place I felt like it wasn’t done iwth Ricky. If you have not read the books, Ricky is a mouse! I used a circle and two leaf shaped pieces that I turned upside down (for the ears) to start creating Rickys head. I painted brown and then added candy eyes and created glasses from a black pipe cleaner. I would actually recommend using googly eyes and not candy eyes as the candy ones got wet and melted today.

For the shirt I simply took a small piece of cardboard from a shipping box, drew a shirt on it and cut out. Then I covered with the red masking tape and hot glued two pieces of popsicle sticks for the hands.  I then secured Ricky on top of his Mighty Robots head! 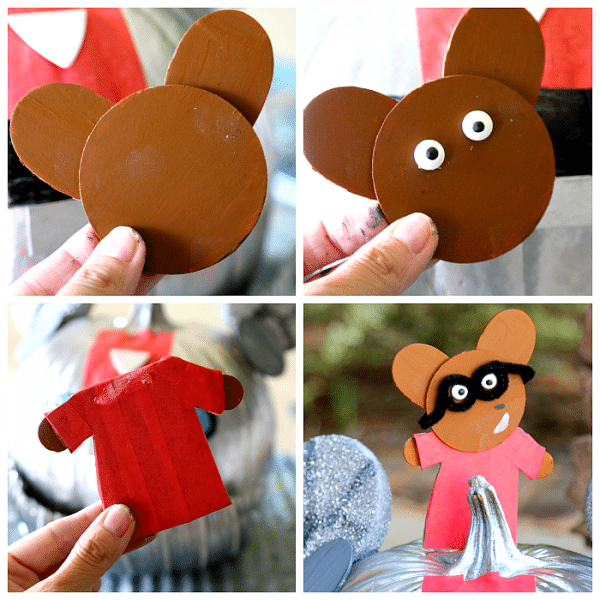 Now you are done! I know it looks like a lot but most of my time here was spent waiting for the paint to dry. It was a pretty easy, no carve pumpkin solution and has inspired me to keep creating more pumpkins this season out of book characters! 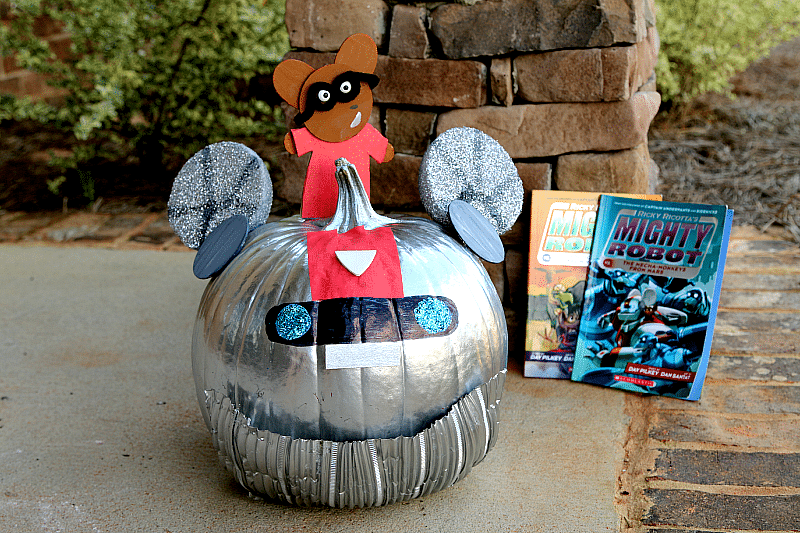 Now you can learn more about this series here

Have any questions on this series or my craft? Be sure to comment!

Tweet9
Pin37
Share1
47 Shares
Note: this article may contain affiliate links. If you make a purchase using one of these links, I may be paid a referral fee at no expense to you.
« Thomas the Train Party: TrackMaster ™ Fun!
Organizing My Makeup- Finally! »