This is a sponsored post written by me on behalf of SUNRIGHTS INC.. All opinions are 100% mine.

I can remember years ago my boys loved the original BEYBLADE products. Now, these toys are back in our home and better than ever!

My boys and I just had a chance to try the new BEYBLADE BURST SWITCHSTRIKE products, and we had a blast!  Here’s why our family now loves these products…

The new BEYBLADE BURST SWITCHSTRIKE Hasbro Product include all of the same features you loved with the last round of toys, but with cool new twists that really revolutionize their play capabilities.

There are four types of BEYBLADE BURST tops, attack, defense, stamina and balance. You can use strategy to see which types work best against the others.

The boys absolutely loved the new BEYBLADE BURST SWITCHSTRIKE tops, and their unique switching powers! They really added a whole new level to the battlefield. Just when you thought one top might win, another came through with its’ SWITCHSTRIKE power for the victory.

As a mother, my own personal favorite product in this line is the BEYBLADE BURST BEYLOCKER. This carrying case allows kids to store their BEYBLADE BURST tops, launchers, ripcords and other items for easy clean-up and on-the-go capabilities. Plus, it comes with one BEYBLADE BURST SWITCHSTRIKE top to get you started! 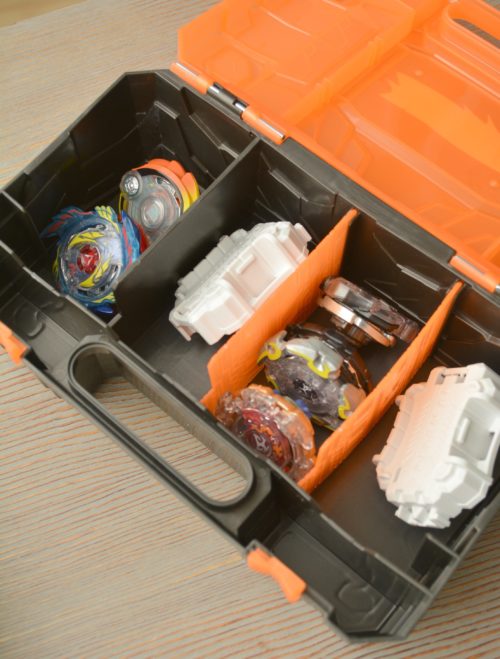 Have you been honing your battle skills? Do you think you have what it takes to be a champion?

The BEYBLADE BURST WORLD TOUR is coming to a city near you! Gather together all your battle buddies ages 8-13, and compete in a head-to-head competition. Winners from each National Championship will go on to the 2018 BEYBLADE BURST World Championship being held on November 3, 2018 in Paris, France at Kidexpo.

Can’t get enough of BEYBLADE BURST? Check out Valt and his friends, as they battle it out to become the best Bladers in the world. You can watch BEYBLADE BURST EVOLUTION on Disney XD every Saturday at 8:30 AM, or catch the reruns throughout the week at 3:30 PM.

Have you tried the new BEYBLADE BURST SWITCHSTRIKE products? What are your favorite features of this new line?

Tweet
Pin3
Share2
5 Shares
Note: this article may contain affiliate links. If you make a purchase using one of these links, I may be paid a referral fee at no expense to you.
« Must Try 21 Day Fix Vegetable Sides
Salt, Sugar, Flour Toddler Science Experiment »