Pogo sticks have been beloved by kids since the early 20th century (honestly, what kid doesn’t want to hop around on a stick?) and with Summer here and boredom striking, there’s no better activity to bring to your rambunctious children than this.

When it comes to pogo sticks, there are hundreds – if not thousands – of options on the market today. It can become difficult, strenuous and annoying trying to find the ideal pogo stick for your child.

That’s why we made it our mission to do the work for you and find the best pogo sticks for kids out there! We cover the best choices, their features, and all things pogo stick.

Let’s get started with our top pick!

In a Hurry? Here’s Our Top Picks…

1. Flybar Foam Maverick Pogo Stick for Kids Ages 5 and Up 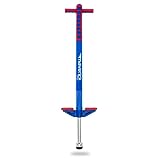 Flybar is considered the original pogo stick company. For decades, Flybar has been producing the best of the best in pogo sticks, and the Flybar Foam Maverick for Kids Ages 5 and Up is no different.

The quality of this pogo stick toy is top-notch. Suitable for children weighing between 40 and 80 pounds and made of sturdy metals and plastics, this pogo stick is as durable as they come. The metal handles and body of the pogo stick is covered in a thick layer of foam to prevent injuries and make play more comfortable and enjoyable.

The pogo stick’s footpegs were carefully constructed to be deeper and wider in order to suit small children. This aspect helps with control and balance for kids who are just starting to learn the ropes.

Overall, this is a wonderful choice for young children who are in need of a safely designed pogo stick for practice.

Other Great Pogo Sticks for Kids

If you have a toddler that bounces off the walls, this Flybar Pogo Jumper for toddlers would make the perfect toy. This isn’t your regular pogo stick –  actually, it’s not much of a stick at all! This pogo stick was created with an expandable bungee cord neck and a large, rectangular base for your child’s feet.

The wide base sits flat on the ground, making it ideal for children between the ages of 3 and 5, who are just starting to develop their coordination skills. Aside from the bungee cord, the entire pogo stick is constructed with soft foams to prevent injury.

This pogo jumper makes adorable squeaking sounds when bounced and is also available in 12 different colors and animal patterns to make playtime even more fun for your toddler!

Yet another renowned toy company, Fisher-Price has created one of the best pogo sticks for young beginners! The rounded base is extra large for better balance and to prevent skidding while bouncing. This practice base can be removed to reveal a regular-sized pogo stick base for whenever your child gets the hang of how to pogo!

This pogo stick was created with children as young as 5 (and up to 8) in mind and because of the wide base, your child will be bouncing here, there, and everywhere in no time! The pogo stick is durable and made of sturdy metals, foams, and plastics that are guaranteed to last years after purchasing.

It is a better-suited toy for children who weigh at least 35 pounds, though – any lighter and this pogo stick may be too difficult for your child to use! 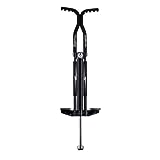 For older kids, we have another awesome Flybar Pogo Stick. This pogo stick is great for kids who are 9 and older, considering it’s a traditional pogo stick with no special components for beginners. This is definitely a more serious pogo stick, sturdy enough to handle up to 160 pounds of tricks and rough play.

The frame and handles of the pogo stick are covered in a comfortable, grippy foam for better control and a decreased risk of injury. The base of this pogo stick is somewhat wide for stability and less skidding, making this an ideal pogo stick for practicing tricks with.

The footpegs on this pogo stick are ribbed to keep your child’s feet from slipping, making the entire experience safer and overall more fun. 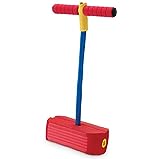 Similar to the Flybar My First Foam Pogo Jumper, the Kidoozie Foam Pogo Jumper is perfect for children as young as 3. Believe it or not, this beginner’s pogo stick is actually durable enough to support 250 pounds (which means even parents can enjoy it if they want)!

This toddler’s pogo toy is also constructed with a large, rectangular foam base, a bungee cord neck, and comfortable foam handles. It can be used safely both indoors and outdoors without the worry of scratching or tearing the foam on hard surfaces or scuffing up indoor flooring.

It’s an affordable, safe, durable, and adjustable option that will grow with your toddler!

Consider This Before You Buy

Now that we’ve gone over our favorite pogo sticks for kids, let’s take a look at a few things to consider before purchasing.

The care of your child’s pogo stick varies based on which type of pogo stick you purchase. If you’re purchasing a pogo stick toy for your toddler made out of foam primarily, simply wiping down the pogo stick with warm soapy water should do.

However, more advanced children’s pogo sticks require a tad more attention and maintenance. For more traditional pogo sticks, cleansing can be done with warm, soapy water – but after cleansing and drying, all springs should be well oiled to prevent rusting, sticking, and obnoxious squeaking. Traditional pogo sticks also have parts, such as the foam, that can be replaced if they start to wear out.

Benefits of Pogo Sticks for Kids

Pogo-ing is also just general exercise, which is, of course, healthy for children of all ages. Children are often too busy having fun hopping from place to place to realize that they’re actually developing their mental and physical strength. Pogo sticks are wonderful for exercising various muscles, which is vital for growing children.

Another great benefit is that pogo sticks get kids outdoors. Getting outdoors is essential for the health of everyone, but spending time out in the sun and fresh air is especially important for kids. Sunshine keeps kids happy and provides wonderful vitamin D-boosting effects that aid in developing strong bones.

Lastly, pogo-ing is simply fun. Free play is yet another essential aspect of childhood and supports healthy development. It gives children a hobby to practice with and get enjoyment from, and there’s really nothing like a content, happy child.

A: As with any toy, there is always the possibility of injury. However, pogo sticks, and especially the options on this list, are made with children – and their needs – in mind.

Of course, children should always be supervised, but overall pogo sticks are safe if your children are careful!

Q: How long will it take for my child to learn how to use the pogo?

Q: Is pogo-ing good exercise for my child?

A: Yes! Pogo-ing is excellent exercise. As we mentioned earlier, pogo-ing builds muscles and is great for a child’s coordination and physical development. Pogo-ing can burn a few hundred calories easily, as well. If your child’s exercise is very important to you, you can keep track of their progress with a fitness watch designed just for them!

Q: Can pogo sticks be used on the grass?

A: All of the pogo sticks we’ve reviewed can be used on practically any indoor or outdoor surface. If the ground is soft, traditional pogo stick bases may dig into the ground, but other than that everything should be fine! (Just watch out for bugs!)

Q: Can you replace broken or missing pogo stick parts?
A: For the most part, yes. Generally, the more renowned pogo stick companies sell replacement parts, like foam for the pogo stick body or handle grips.

It’s worth noting that pogo sticks are usually pretty durable, so you most likely won’t need to find any vital replacement parts.

Q: The pogo stick is too stiff for my child to use. Can this be fixed?

A: Pogo sticks can be initially difficult for kids to use, especially if it’s a traditional pogo stick. This is because they’re still fresh out of the factory and haven’t been broken in.

Pogo sticks can be broken in with regular use, making it easier for children to play with as time goes on.

Pogo sticks are a great way to get kids outside and playing. They’re awesome fun and wonderful for exercise – in fact, they’ve been shown to build specific muscles in the body and burn hundreds of calories! It’s no wonder that pogo sticks have been beloved by children for decades.

We hope you enjoyed our article covering the best pogo sticks for kids – from toddlers to teenagers!