Today I woke up from another bad night of sleep and decided that’s it. We are going to find a new mattress. The past two mattresses we have purchased have been great in the beginning and then wear out to dips. It basically makes for cracks in your back and tossing and turning.

We knew we were going to have to swallow some credit card debt and I figured it would take about $3000-$4000 to get a mattress that lasted for the next 10+ years. At this point anything that allows me to sleep would be a good fit. I cant exactly take a sleeping pill anytime I want rest, kwim?

So we went to Rooms 2 Go first. They had a pretty good selection and we were able to test out TempurPedic, Sealy, Simmons, BeautyRest, and a ton of others. For the most part all of them felt pretty much like our current mattress except for Temper-pedic. When it comes to Chris and I, he likes a firm mattress and I like to sink into one like a pillow. Its hard to get us to agree.

We both settled on a Tempur-Pedic and with a 20 year warranty and a 90 day trial period, we figured it just might be worth the $3100 price tag that followed it. I swear I owe that much on my SUV though. It’s a big chunk of change and I don’t take the purchase lightly or quickly.

Before we made the decision, we really wanted to test out a Sleep Number mattress. They advertise that one side can be hard and one side soft, so if we found the right overall feel, it may be a good decision for us as a couple. We went over to the mall where I knew for sure they had a Sleep Number store.

When we walked in, the employee on duty (later to learn the manager) said hi but walked off. He did not ask us what we were looking for, attempt to give us any information, and left us basically blind at the front door. Its not that I needed help, but since these mattresses are supposedly better than other ones out there, a little customer service would have been a nice start .

Nonetheless, we laid down on the first bed and Charlotte hopped on the bed next to us. She loves to test out mattresses and we had been doing it all day so she knew the drill. On the bed that she was on, it had a very very large stuffed dog laying on the entire bed. Charlotte crawled up and laid on it hugging it and was giggling. She was not upset, yelling, jumping, or being inappropriate. Just hugging the big stuffed animal dog and giggling.

Dh looked over and made the comment that Charlotte found the mattress she wanted.

As I am standing up from the 1st mattress, the employee walked by and told me to tell her to get off. I was pretty taken by surprise by the sense of attitude. I said Charlotte, get off the bed. She started to protest for a minute and I told her to get up and that we were leaving. She got off immediately and walked over to me and we left and went to the Disney store.

Standing in the Disney store I started to get a little heated. We came all the way to the mall just to test out Sleep Number. Charlotte was NOT doing anything wrong. She was hugging the stuffed animal dog on the bed. SMILING. She was being quiet.

HELLO. That’s not exactly easy to say about a 4 year old.

I decided to walk back to Sleep Number to get the managers business card. I really wanted to express how I felt about my negative experience. I go back (alone) and the guy was sitting at his computer.  I could just tell he knew why I was walking back in.  I asked him for the managers card. He said “I am the manager”.

What? You cannot be serious.

What exactly are the qualifications now a days? Speaking English?

I sat down at the table in front of him, explained to him we came in to attempt to purchase and I wanted to know exactly what Charlotte was doing wrong that she had to get up.

He said “She was laying on the display”.

I said “It was a stuffed animal. On the bed. She was not jumping up and down. She was laying there.”

He said “She was on the display”.

I said “It was a STUFFED ANIMAL.”

Then he said something that really pissed me off.

He said “You didn’t care what she was doing.“

EXCUSE ME. YOU SAID WHAT?

Oh, now you done pissed off a mom.

I think it made me so mad I started to shake. I said “That is not true. We were testing the mattress RIGHT NEXT To her and she was laying on the bed there. She was not doing anything inappropriate and the SECOND you said something to me I asked her to get up and she did.”

The guy just shrugged. I seriously could have smacked him.

Sales people like him drive Kias. Till they die.

Now let me ask you, should a company be held responsible for its employees actions? I know I am held responsible for mine on the blog. If  I blast someone or something or use some sort of language that a company judges me over, I lose my business with them. If I have an opinion on something that a visitor doesn’t like, I run the risk of them never visiting me again.

I say yes, they are indeed responsible.

I was not only disappointed, I was irritated that this asshole could have the audacity to make those statements when they were not even close to being true. I would challenge Sleep Number to pull the security tapes to find a well behaved child hugging their “display” but I mostly challenge them to start training their employees on the art of  basic customer service and courtesy.

If you really think about it, what would a stuffed animal, a LARGE stuffed animal, be laying on a bed that you are supposed to test period. Since it was the 2nd in line of the mattresses, clearly our next test would have been on that one and we would have had to throw it on the floor. If it was such an important “display”, it seems to me it wouldn’t be where anyone could touch it at all.

If you want to know the truth, what I think really happened was that we walked in wearing jeans, T-shirts and sandals and the guy thought we were not worth his time.  Surely we couldn’t afford a mattress.  Too bad behind the jeans and t-shirts was a perfect credit  history and ability to pay cash if we wanted.

Here is the store you go to if you are willing to be insulted, talked down too, and helped worth a crap. 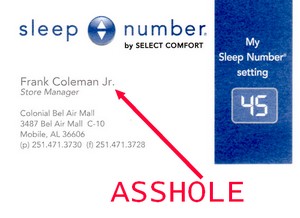 And bring all the neighborhood kids.

Tweet
Pin
Share
0 Shares
Note: this article may contain affiliate links. If you make a purchase using one of these links, I may be paid a referral fee at no expense to you.
« How to Make a Crayon Roll
My New Discount Tempurpedic Mattress »