I can count on one hand how many times I had pork growing up.  Truly, our meat options were mostly chicken, ground beef, and the occasional fish that my dad caught on a good day at the river.  And even then, I hid my fish in the table runners when either of my parents’ attention was diverted.  I am not a seafood lover.  Not at all.  I cannot even think of creamed corn, either, because it was always paired with fish.  Nope.  No, thank you.  I’ll go hungry tonight.

Randy didn’t have much pork either, but he knew that he actually liked it when we got married.  I, on the other hand, couldn’t really remember anything about pork, so I just nodded in agreement when he said we should try some pulled pork within the first few months of marriage.  I was so in love, I probably would have gagged down fish if he suggested we try that.  I’m glad he suggested pork!  Click {here} to learn more about safety while cooking pork!

Weeks after we moved from our hometown in Utah down to Houston, Texas, we celebrated our first holiday together: 4th of July.  What better BBQ to have in The South than BBQ Pulled Pork?!  From the first bite, I was hooked!  The application for cooking may have changed in the almost-18 years we’ve been married, but the flavors are still incredible!  Here’s what you’ll need: 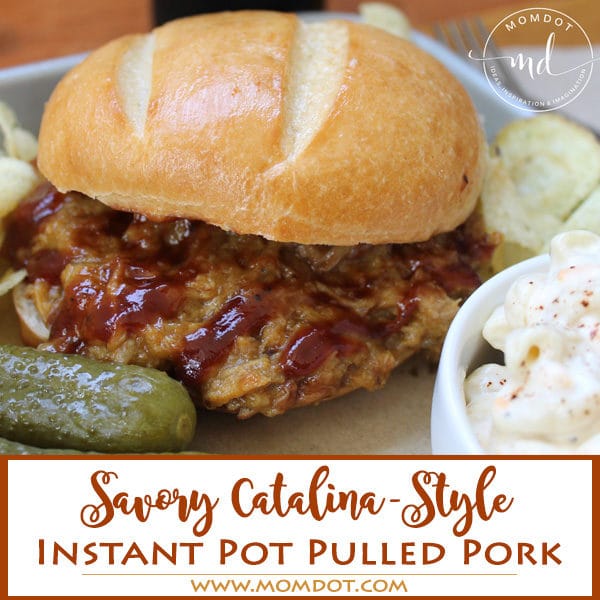 Disclaimer: The pork came out a bit different for these pictures, not looking like your run-of-the-mill pulled pork, but the taste was still perfection!  Don’t let the pictures dissuade you from giving it a chance. 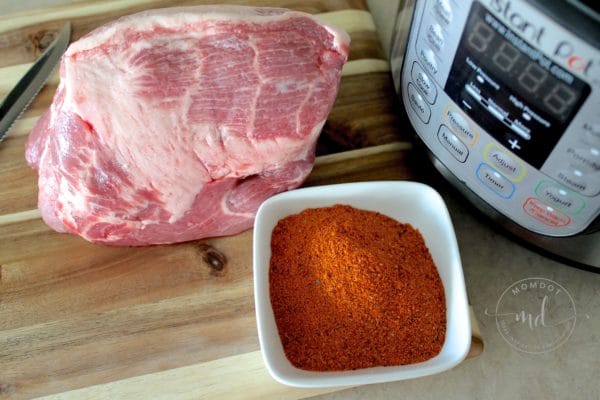 The pork shoulder I purchased was 7 pounds.  I cut it in half, freezing the other portion for later.  Also, the original recipe called for a 3 pound roast, but I felt the entire bottle of BBQ sauce overpowered the amount of pork too heavily, so I added a bit more meat.  If you like your meat more saucy, I would suggest using closer to the 3 pound roast.  If you like your pulled pork a bit more “dry,” I would suggest 3.5 pounds, or more.  Or, use less sauce than recommended.  Either would work just as well, I guess.  We like leftovers, so I always choose to cook more initially, enjoying the meal for lunch the next day as well. 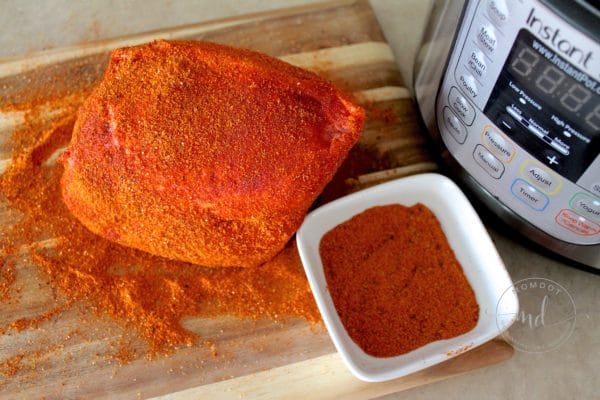 A spice rub is completely optional, but I believe it gives it such a delicious, rich, savory flavor.  If you choose to do the rub, follow me for a few minutes.  If not, skip down a bit for the rest of the recipe. The Rub I use recommends 2 Tbsp. per pound.  I started out with 6 tablespoons, but soon realized that I did not need that much by half.  I felt I was pretty liberal in my wicked rubbing skills, but 6 tablespoons was a bit of an overkill.  Maybe 1 tablespoon per pound would be a better suggestion.  At any rate, rub the spices along each side of your pork shoulder. 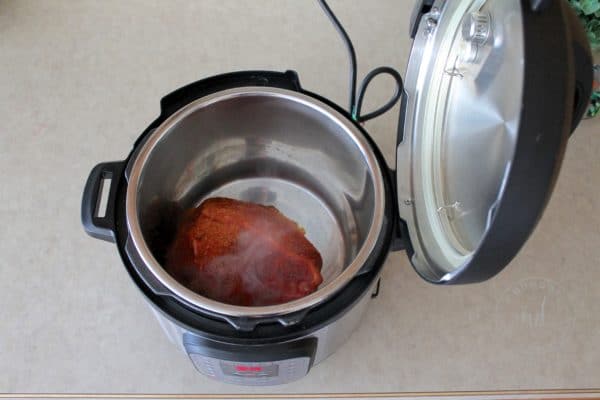 With the stainless steel bowl in your Instant Pot or other Electric Pressure Cooker, pour 1 Tbsp. olive oil into the bottom.  Seer your meat on each side using the Saute feature.  Just a few minutes on each side, enough to lightly brown all sides.  I would say approximately five minutes on this step. 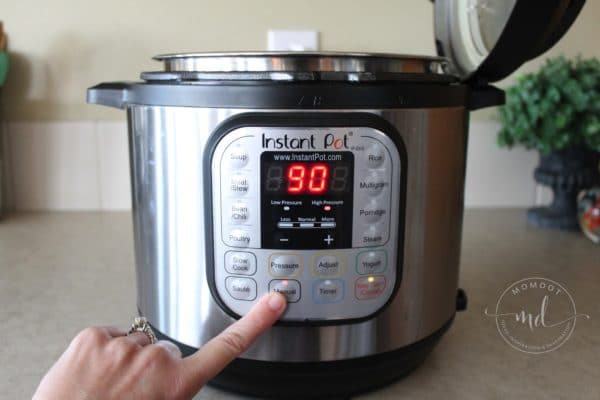 Next, pour your chicken broth over the browned meat.  With the lid locked and the pressure valve firmly in place on Sealing, set your Instant Pot on Manual for 90 minutes.  Where we once had to put the roast into the slow cooker as soon as we woke to enjoy it by dinner, now we can have Savory Catalina-Style Pulled Pork in less than TWO HOURS!  Fantastic!

Helpful Tip:  Once you start to hear pressure building, like the steam is trying to escape, place both hands on either side of the lid and quickly press downward.  Don’t allow your hands to linger, since it may be pretty hot by this point, but the quick downward motion of the lid will help it seal faster. 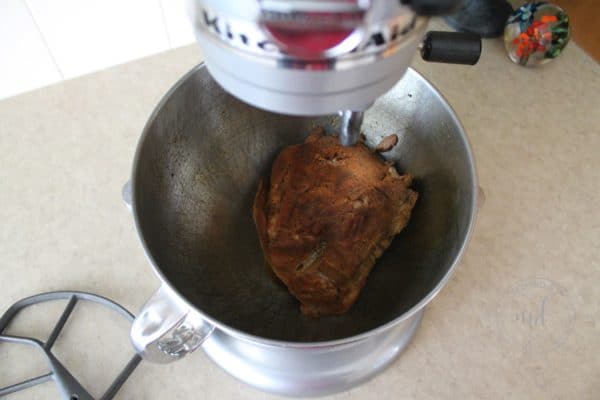 Here is the reason that my pulled pork doesn’t look too pulled in these pictures: I use my stand mixer to help me shred my meat.  This particular pork shoulder had a bit more fat than I would have liked, so there was one portion of the meat that wouldn’t shred as well as the rest of it.  Hence the more mushed look.  It doesn’t always look like that.  So of course it had to happen now!  I should have just shredded it with two forks, but I was feeling a bit lazy.  And starving.  But mostly lazy.  So I rushed the process and over “pulled” the pork.  Darn, Darn, Darney Darn! 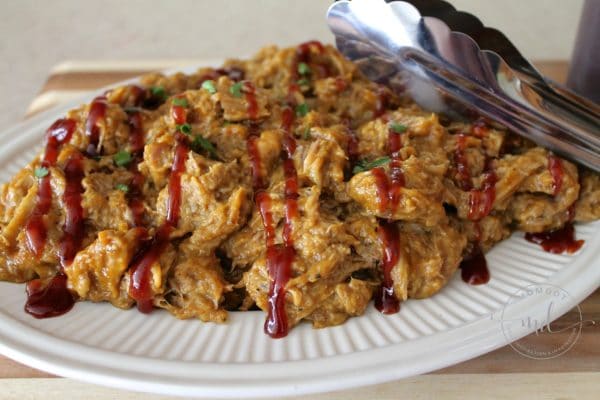 Once your pork is shredded, pour the bottle of BBQ sauce, the brown sugar, and the paprika in.  Mix well.  Again, this could be customized to your preference of saucy-ness.  We love ourselves a juicy sandwich, so I used the entire bottle with my 3.5 pounds of pork.  Delicious!!! 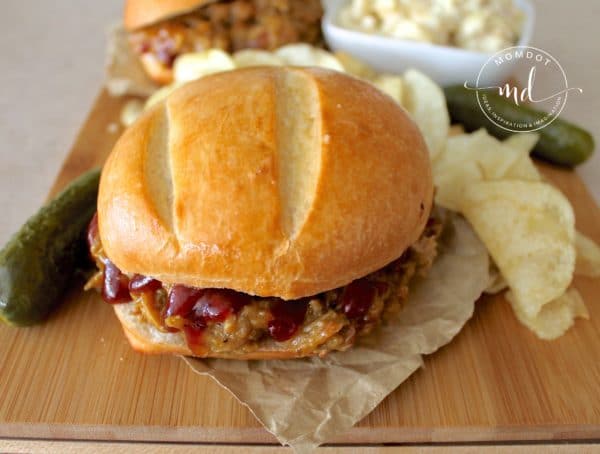 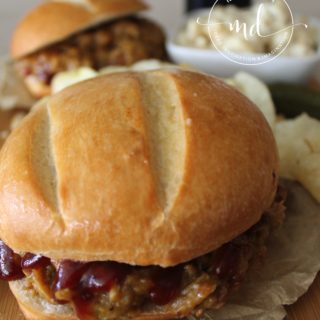 A quick and easy Instant Pot Recipe that will put savory pulled pork between a bun in less than 2 hours!  Dinner, anyone? 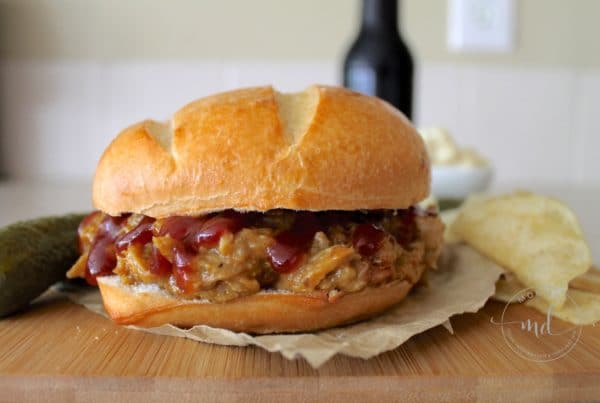 What about you?  Have you made pork a bunch, or just a few times?  Have you ever gotten a roast that doesn’t shred as well as the last glorious pulled pork you made?  Are you looking for a delicious pork meal that doesn’t take all day to make? Maybe even one that could benefit with a side of cooked rice?  This is a great one, perfect for a family dinner, a BBQ, or even a potluck!  I love that the pressure cooker shaves the time by more than half! 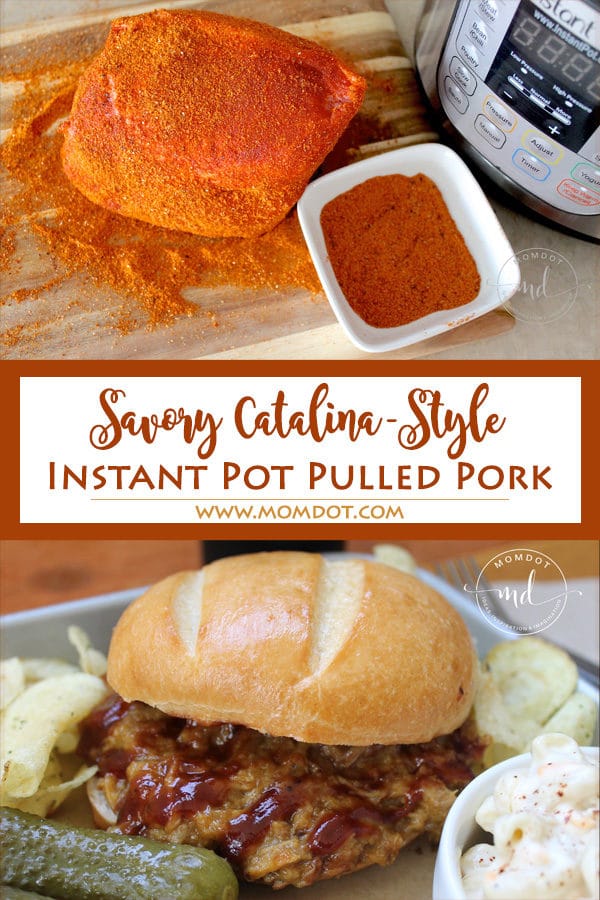 Tweet
Pin453
Share1
454 Shares
Note: this article may contain affiliate links. If you make a purchase using one of these links, I may be paid a referral fee at no expense to you.
« Candy Lei: A simple Graduation gift
4 Must-Have Free Summer Printables: Print Some Sunshine »