How to make a tulle pom pom ball for wands…otherwise known as, “how to make a cat toy” in my house.

I made a tulle wand the other day, with intentions of giving it to my friend Kim’s daughter.  But she is pretty young and if she were to pull the pins out, it could mean a dangerous situation. Not wanting to be responsible for my best friend’s child’s untimely death by lace pin, I decided to get to work on a tulle ball tutorial for all those in the same situation. Except, instead of a tulle wand, I’m going to turn my example into a cat toy for Gwen. It could also be used for hair puff pony-o’s, cheerleading pom poms, decorative shirt..um…decorations. Earrings? OK, that’s a bit too far and way too 80’s.

These diy tulle pom-poms would also make adorable garland decorations above a refreshment table at a birthday party, baby shower, or a gender reveal party! 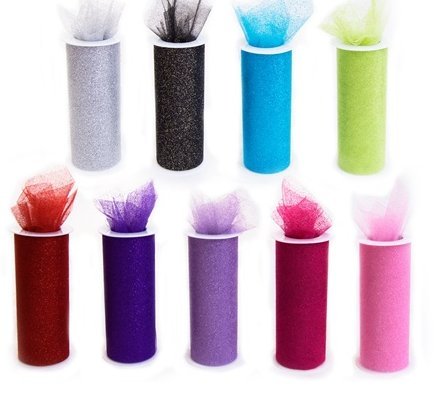 *SALE* 9 GLITTER Tulle Rolls each one 6

These size tulle rolls are easiest to make most pom pom balls. They wrap so easy! If you buy tulle off the bolts at the craft stores, they have to be cut every which way for a tulle ball and that makes the craft frustrating.

Buy this awesome set I found that gives you a variety of colors for all holidays and occasions.

How to make a tulle pom pom ball

Here is your How To Make a Tulle Ball {So you can still give it to the baby girl/kitten in your life} tutorial:

1) The first step: you have to decide the size of your tulle ball. I took out a glass from my kitchen, since I was making this for my kitten, and traced the edges on an old, used cardboard shipping box I had laying around.  Dependent on the size you’d like, you could use a cup, a CD, a dessert plate, or even a dinner plate.  The sky is the limit when it comes to these decorative tulle balls!

2) After tracing, I used a straight razor

and cut the circles, including a smaller circle in the middle so it has an appearance of a doughnut. To be honest, I didn’t take care to make this perfect, so don’t kill yourself over it.  If anyone looks close enough to realize that they’re not exact, you can immediately disown and unfriend them.  You don’t need that negativity in your life:)

3) Take a string, twine, yarn, or whatever you want to use to tie the middle with. I had ribbon laying around, so I used a nice skinny ribbon. They have some really strong materials on the market if you are using your tulle pom pom ball for something that needs to hold up long term.

4) Make a loop as if you are tying it and lay it between your 2 doughnut pieces. 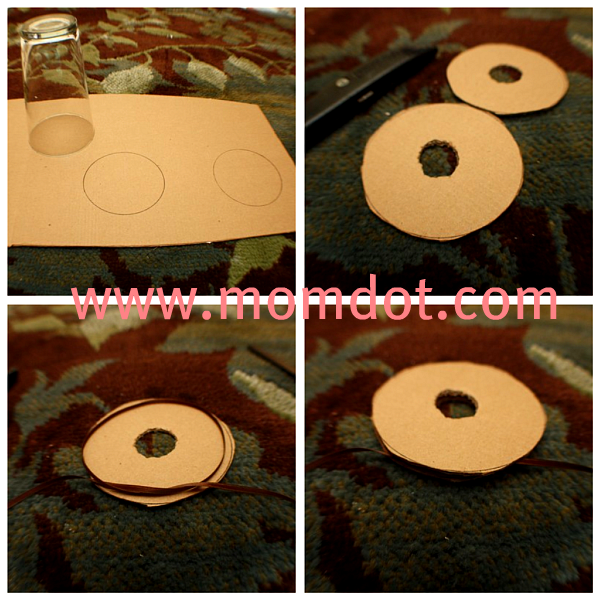 5) Moving on to your tulle. My pom pom was going to be small, since it was for a kitten toy, so I took about a yard of tulle and started wrapping. Just put your piece through the middle hole and then wrap around and through the hole and back out again, round and round till it’s filled up.

6) Take a pair of crafting scissors and cut the outside of the tulle now around the entire thing. Take care not to cut your middle string if it’s sticking out somewhere.  Helpful Hint: You could also consider cutting a bit to the outside of one of the cardboard “doughnuts”, ensuring that you do not cut the string.  Not too far to the outside, since you want them to be as close to even when cut as possible, but enough to ensure you don’t cut the string.

Trust me, I cut mine a time or two.  Be vigilant in your cutting. 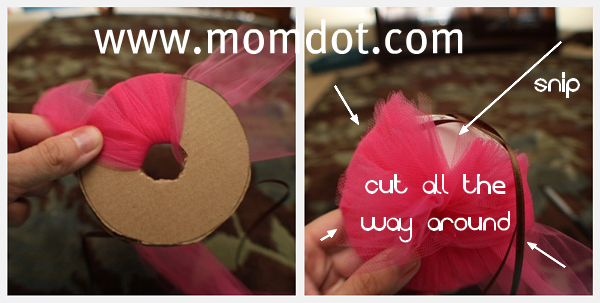 is cut, you will have two distinct sides. Slowly separate the two templates a little bit and you should see your string/ribbon/twine/yarn in the middle. This is where you tie that sucker up good and TIGHT in a knot.  {Right over left, left over right, makes a knot both tidy and tight!}

8 ) Then pull off your cardboard sides and you will be left with a puffy ball.  Make sure to pull the cardboard templates slowly while holding onto the other side, so you don’t tug the tulle unevenly. 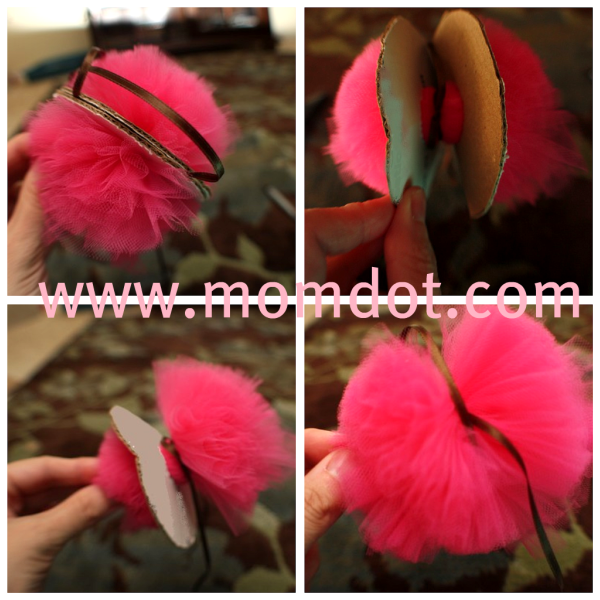 10) Now you can attach it to whatever you want. Rules on attachment are going to depend on the craft you are making. In my house….well, it was just a cat toy. But now you know how to make a tulle pom pom ball!!

So take it and throw! 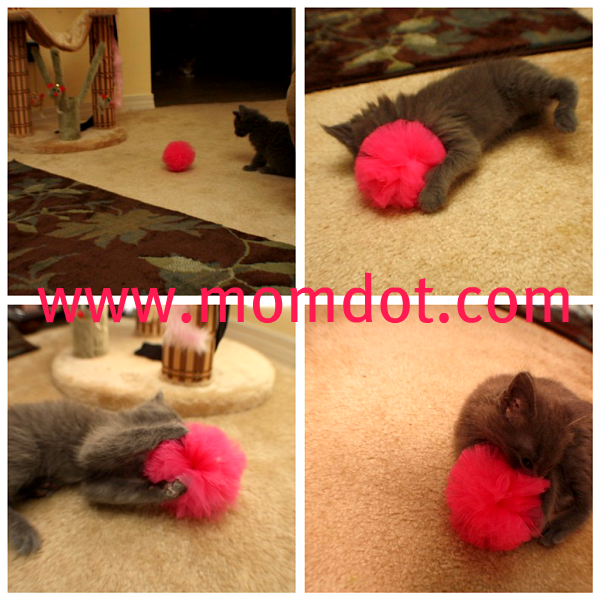 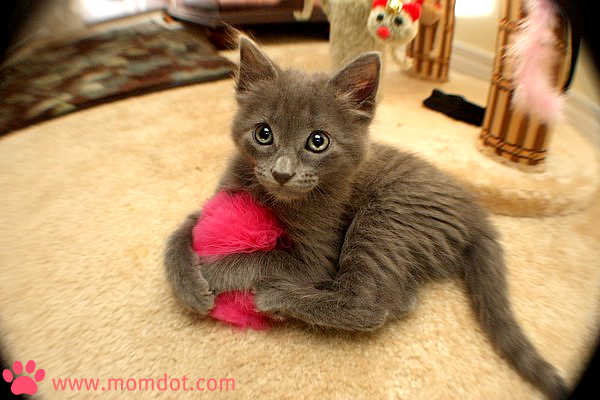 By the way, if you do want to make a cat toy, getting some crinkle paper or ribbon would also make it a ton of fun for a cat!

Tulle is not the only material you could use; yarn or cut strips of fabric could also be super cute.  I’m going to test out some other ideas that tie in with how to make a tulle pom pom ball.  I’ll post an update when I have it.

Want to see something else awesome? Try this Tutu Bow Holder  – Click below to learn how to make it! 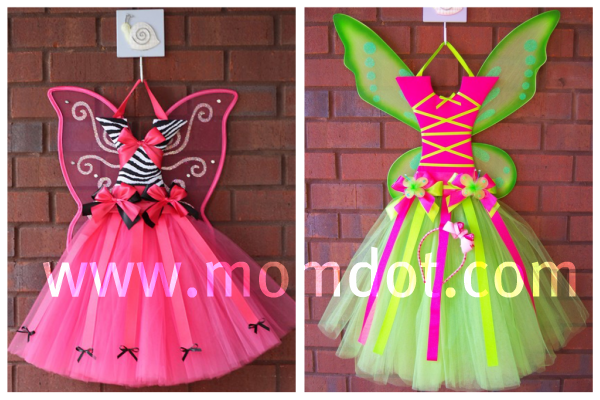 or try this How to make a Tutu 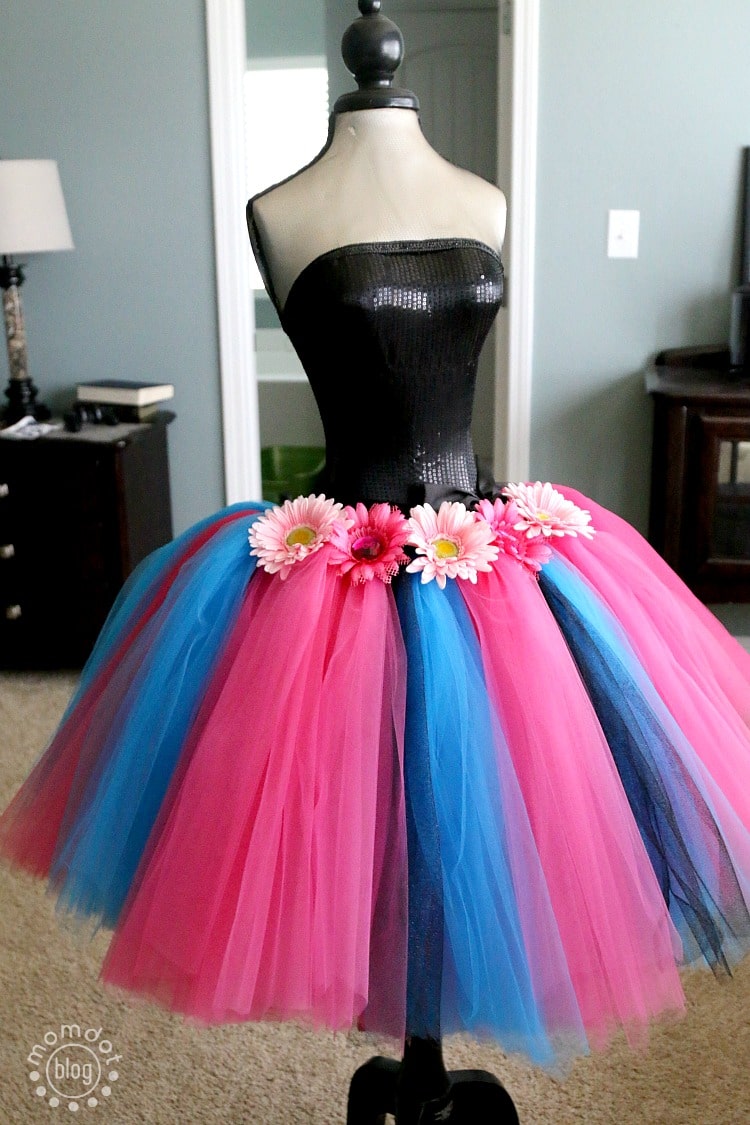 58 thoughts on “How to make a Tulle Pom Pom Ball”